Providing iPads Instead of Textbooks For Classroom Learning Gets My Vote 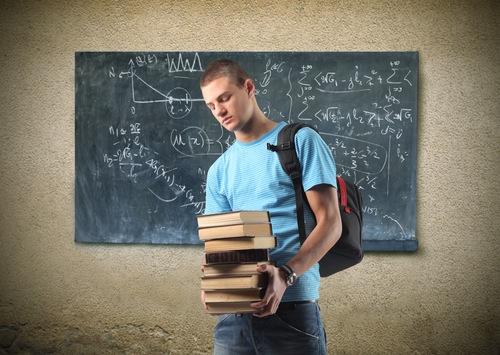 I don't know about you but my house has more computers than we need. Yes, that's partly due to the fact that my son, who today works in information technology, built two of his own computers during his middle school and high school years. Despite that, my husband and I each have a laptop, issued by our respective companies; my daugher has a MacBook; and we have a netbook and an iPad for our family's use.

Even with all this home-based technology, my daughter leaves for school each morning, running to catch her bus while laden down with a textbook-filled backpack and more books in her  arms. Whenever she wears her backpack, she doesn't stand up straight, and like so many teens, wears it slung over one shoulder instead of the way it is intended to be worn: high up on her back, with the straps snug around both of her shoulders. But that's another whole blog entry ...

Recently, I read about school districts across the country that are getting away from textbooks and in their place, issuing iPads to students.

Even though I'm a devoted fan of the printed page - especially since I worked for newspapers for many years - I think the iPad vs. textbook choice some schools are making is a excellent one. Like of a lot of mothers, I worry about the physical toll that lugging heavy textbooks may be taking on my daughter's body (I worried about it for my son as well when he was hulking a heavy backpack in school). I mean, I can barely lift my daughter's backpack to move it out of the way when she comes home from school and drops it, with a groan of relief, on the kitchen floor. I'm not alone in thinking that the amount of books she carts back and forth to school and home is excessive; my husband, and a lot of mothers I know, agree that today, kids' backpacks are way too heavy.

Having an iPad to use for schoolwork, instead of textbooks, would break this cycle for my daughter and millions of other children. Apparently schools can get the iPads for $500 each from Apple - that's much less that you and I would pay for one. Most schools are using filters and blocks on the iPads to keep kids away from websites they shouldn't be visiting, and many are having kids turn the iPads back in during school vacations, etc.

That's enough for me. While I love turning the pages of books - and have always wanted the same for my children - I'd rather see them tote a small, thin tablet computer than walk crookedly due to the weight of the textbooks in their backpacks.

Tweet
Tags:
Back to School Elementary School Health and Fitness High School Homework Middle School Technology After-School
First Grade is More Than Academics
How to Advocate for Your Child with Learning Disab...

#1 Brooke 2011-09-17 20:42
My school fees went up because my school uses macbooks, ipods, and ipads for the younger kids and just macbooks for middle school through high school.

We now have to pay 50 dollars for them.
Refresh comments list
RSS feed for comments to this post