Should A School Limit Parental Access to Teachers? No Way! 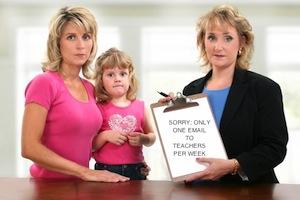 File this under the category of: What the heck were they thinking?

Last week, education officials at an elementary school in Seattle, WA, sent a letter home to parents of children at the school, advising them of a new limit imposed on emails sent to teachers.

Educators at Brookside Elementary School, located in the Shoreline School District, which is north of Seattle, informed parents that effective immediately they could send one email per week to their child’s teacher. In addition, the email was to contain “one paragraph,” and the topic was limited to “important issues,” according to a report published on nwcn.com, the website of KING 5 TV, Northwest Cable News in Seattle.

As you might imagine, the reaction from parents was angry and swift, with many contacting the TV station to vent their fury.

In their defense, school officials explained that with full classrooms, teachers were apparently feeling overwhelmed by the numerous emails they were receiving each week from parents—sometimes the same parents, over and over.

Regardless, wouldn’t you be outraged if you received a similar letter from education officials at your child’s school?

Last week, I emailed one of my children’s teachers to discuss my child’s progress in a particular class. The teacher emailed me back, and offered time for a phone conference. It took a few more days before it happened—the Thanksgiving break and all—but we finally connected. He answered my questions, offered some guidance, and together we developed a home-school action plan to get my child back on track in the class.

Imagine, however, if that was my one allotted email—or phone call—to that teacher last week? I’d be as outraged as the parents at the Brookside School. Why is it that education officials often seem as though teachers should have more rights than parents? And act as though they’re exempted from the basic rules of business etiquette? Imagine if I told SchoolFamily.com readers that they were only allowed to email the editor (that’s me) once a week because I’m so busy. It’d be an outrageous move and I’d deserve—and expect—a backlash.

If there were parents—or a parent—in that or any other school district who were inundating a specific teacher with numerous emails per day, then school officials should have facilitated a face-to-face meeting between the parent(s) and the teacher. At that time, the educators could have politely but firmly advised the parent that the teacher could not be expected to respond to numerous emails per day from the same parent.

But to set a Draconian policy that restricts all parents wanting to email their child’s teacher? That’s outrageous in my book.

Do you agree? Let me know by commenting here.

#3 Debbie 2011-12-12 20:20
My daughter is a very devoted teacher who responds promptly to parent's emails as well as other communications. Her students use an agenda for their homework assignments as well as communication to parents or from parents. This seems to work great for her. These go home daily and parents are supposed to sign these each day. If a note in the agenda book can't completely address either the parents' concerns or the teacher's, a conference either in person or on the phone can be arranged. This seems to work better than multiple emails.
#2 Emily 2011-12-02 18:16
I understand what the school was trying to do, but they went about it in the wrong way. I'd be so annoyed if I was a parent at that school. It just sets a bad tone for communication. Some parents are going to be mad and ignore the rule and some will hesitate to send a message at all, fearing they will be inconveniencing the teacher. Why didn't they just send a note asking parents to be patient, that it may take a while for teachers to respond to email messages due to the high volume they receive? Or suggesting that if parents have multiple issues to discuss, they make a meeting to talk to the teacher about them rather than clogging their in boxes.
#1 Jackie 2011-12-02 16:59
One e-mail should be enough. If your child has a major problem then a phone call should be made, otherwise let's try to let them do their jobs and not micro-manage every decision a teacher makes.
Refresh comments list
RSS feed for comments to this post