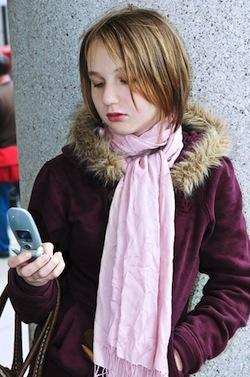 The Internet has been abuzz this week with news that the practice of sexting—kids texting naked photos or videos of themselves or others via cell phone—is nowhere near as rampant as we’d all been led to believe.

The news is the result of a national survey conducted by researchers at the Crimes Against Children Research Center (CCRC) at the University of New Hampshire, and was reported Monday in Pediatrics: The Official Journal of the American Academy of Pediatrics.

The four authors of the survey, which is called “Prevalence and Characteristics of Youth Sexting: A National Study,” concluded that making or sending sexual images is “… far from being a normative behavior” among teens and younger children.

However, the study found that while the rate of sexting is lower than initially believed, children and teens need to be better informed about the “legal consequences of sexting,” and, more immediately, what to do if they receive such an image.

Has your teen received any sexting images? Might be good to ask. It also might be good for you to refresh your Internet safety knowledge by reading SchoolFamily.com's Internet Safety Tips for Parents.

Conducted by phone, the CCRC survey included 1,560 young people, ages 10-17, who use the Internet. Just 2 ½ percent said they’d made nude or nearly nude photos or videos of themselves, and of that figure, only 1 percent said the images were “sexually explicit” (i.e. images of breasts, genitals, or buttocks).

Researchers also found that few students who reported receiving such images had then distributed them.

The study was conducted by Kimberly J. Mitchell, Ph.D., a psychologist at UNH; David Finkelhor, Ph.D., UNH sociology professor and director of the CCCRC; Lisa M. Jones, Ph.D., research assistant and professor of psychology at the CCRC; and Janis Wolak, JD, a senior researcher at the CCRC.