Are You Welcome In Your Child's Classroom? 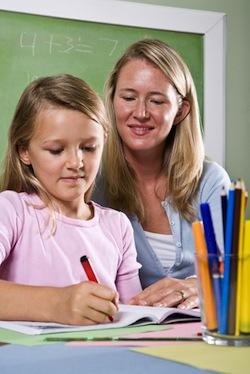 Have you ever attempted to sit in on one of your children’s classes at school and been turned away? If not, and if you were actually welcomed into the class by school officials, consider yourself lucky. Even though the ability to do so is a central tenet of No Child Left Behind, many schools put up roadblocks when parents want to sit in.

According to Jay Mathews, education columnist and blogger for the Washington Post, it’s a fairly frequent practice even when it may not be a school’s policy: “The resistance to parent observations,” he writes about schools, “is not so much a policy as an unexamined taboo.”

In the No Child Left Behind Act of 2002, which expanded upon the 1965-enacted Elementary and Secondary Education Act, a section called “Parental Involvement” includes provisions for “shared accountability between schools and parents for high student achievement”—an aspect of which includes having parents be present in their child’s classroom.

“Volunteering and observing in their child’s classroom is an important activity for parents’ shared responsibility for high student academic achievement and is also one that helps both the school and parents build and develop a partnership to help children achieve the state’s high standards.” [NCLB, Section 1118(d)(1), ESEA.]

Yet many school districts remain virtually cloistered when it comes to allowing parents to step inside. And among the reasons given to parents for being kept out is that their presence would create a distraction.

It appears that legislative action might be required to mandate that schools open up. In Virginia, Mathews writes about a father who enjoyed spending an hour at his daughter’s school, observing her during reading practice. Later, after seeing some of Mathews’ columns about parents being denied access to their children's classes, he used his authority as a member of the Virginia House of Delegates to add a provision to pending education legislation. If it passes, which Mathews thinks is unlikely, local school boards would be required to “adopt and implement policies” allowing parents to be observers in their children’s’ classrooms.

Are you able to volunteer and/or observe in your child’s classroom without any resistance from school officials? Please share your experiences with us.

#7 yolanda ortiz 2014-10-15 13:56
I have an issue and really need someone to help me. First if you have something negative to say please, please keep it to yourself i am seeking help with a situation as a loving, caring mother not my flaws. Anyhow my 10 yr old daughter has been going to tbe same school Ferber for 3 years. This year my 5 year old started school at Ferber. Last year I went on field trips with my daughter with no issues. This year however I signed up to chaperone and go on firld trip with my son and the dag before the field trip i was told that i could not go because according to a background check i have been denied to go on field trips or volunteer at the school. Now aIm not perfect I ve made some real STUPID CHOICES and i have paid the consequences and served my time. Now i know you thinking oh well they have every reason to deny you. But do they? My felony doesnt consist of any physical abuse or anything that will be a threat or harm to any children. My background consist of check writing (bouncing check). What I dont understand is that these charges are from 2007 but i was convicted in 2010. Since then I completed my probation successfully I paid my restitution. And I have changed my friends, my lifestyle and Im a completely different person then that young minded street mentality woman i was. I have been involve in everything my children do this pass summer i volunteer as soccer coach for my daughter volunteer as a tball coach for my son i was no THREAT to those children. Why now am i been denied to be part of my 5yrs olf first n only year in kindergarten. Its heartbreaking to tell my son No mommy cant go on the fieldtrip with you to see his face get sad and let me know other kids mom go on field trip. Even when i try to explain that mommy made mistakes that are stopping her from going he is 5 he dont understand.
I went to the school district and I spoke to the superintendent assistant and he said he decides rather or not to deny or approved. And based on my crimi al background patter of writing checks he doesnt thjnk i should be chapperoning or volunteering in my children school. He will consider revisiting his decision but as it stand right now he is firm on his decision. I tried to plead my case but with no avail i left his office devastated and in tears as a mom who is involve in her children life it HURTS. I feel honesgly like its biased opinion on hjs behalf i feel like its a skin color. Its racist thing. Im sure every parent that chaperone is not perfect and has something in their background. I really would like someone to help me know what step i should take in this matter. Or some advice how to deal with it.
#6 Donna 2014-09-11 22:26
I had been hearing that our science teacher is not teaching. I wanted to see what was going on in the class. I went to the office, checked in with the secretary, she gave me a vistors tag, announced the teacher I would like visit. I went up about five minutes later before the children arrived. Asked if there was a seat in the back, which she graciously gave me, and a book to follow along. I sat quietly in the back, made no comments, following along and observing. It was like I wasn't there. Which, of course was my plan. She did great job teaching. The kids were well behaved and participated. After class, I left the room and check out at the front desk. 30 minutes later I received an irate phone call from the Principal telling me I violated the teachers union contract. At no time has this rule in the contract been brought to any parents attention. I merely said, "That is my son in that room, as parent I have a right see him." He said, "You do, but you have prior announcement and approval." I did have prior announcement,(5 minute) but was dumbfounded when it has to be approved. I have yet confirm this is in the union contract, but I find it a violation of a parents rights to a minor. Does anyone know about teacher union contracts with such language?

PS The kids were delighted to have me there and asked if I could come back because that was the most she has taught them all year!
#5 Dana Freeman 2014-09-05 16:24
I was at my child's school yesterday and went a few minutes early because I was planning to eat lunch with her. The teacher welcomed me in the room, and I sat in the back. The kids were reading quietly while she was conferencing with each student. The teacher seemed to be fine with me being there. After lunch when I was walking down the hall with my daughter, I was stopped by office personnel and told that the new principal did not want parents in the classroom because it was disruptive. I was totally floored. I have never been denied at this particular school or any other to be in my child's class. The principal's reasoning was that she feels parents are disruptive. I was not disruptive and the teacher had no problem with my presence. I am really shocked and disappointed that this new principal is going to turn parents away.
#4 Laura Lee Gayman 2013-09-27 14:03
I am concerned about a teachers aide that is bullying the students. 1 student cries in her class.
#3 Patricia Henderson 2012-02-09 04:27
I have been involved in my child's education and sitting in her classrooms, I don't talk to other students and I only speak to my child or the teacher. While being there I found out that they take points from the children for there behavior witch affects their grades. That is a violation of the school guidelines. I also found out that the lesson plan they have for the children are not out of the textbooks. That means our children are not getting all the lessons, practice, or time that they need to pass these test they are given. I brought it to the attentions of the principal... now it is being said that I am intimidating and the teachers no longer wants me in the classrooms! We have to save our children at all cost, and I will not let them take me out of my child classes. I will fight for our rights because my child is worth it... I am not a part of the problem... I am apart of the solution!
#2 Brosti 2012-01-27 16:32
The tug-of-war between parental involvement & school operations requires a lot of negotiation, communication, and thought. I had assumed that parents in the classroom was always a good thing, until a fellow parent told me about how another child's parent was in her child's classroom earlier this year and said something inappropriate and troubling to my friend's child! The incident mushroomed into a source of unnecessary anxiety for my friend's child. It's important to remember that parents are people with all the usual complexities, competing interests, and variations. Some are great, some are not. Schools need to welcome parents while protecting their mandate to keep the kids safe and learning. Sometimes this can be quite challenging!
#1 Kendra Pyke 2012-01-27 05:20
Yes, we are absolutely allowed in the classroom. A lot of the time we are there as scheduled volunteers. However, there are other times when I have needed to drop off something to my daughter and I have always been welcomed into the classroom. Of course, I wait for the teachers invitation to enter once she has seen me at the door, and I am always careful to not disrupt what is happening in the classroom. I find it's a good way to open the doors of communication about what is happening in class.
Refresh comments list
RSS feed for comments to this post