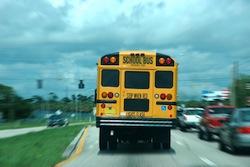 Should your child’s chronic school tardiness be a crime?

I don’t know about you, but my kids have been late to school many times over the years. Mostly it’s due to overtiredness because they stay up too late—often because they’re completing volumes of homework—despite my admonitions against doing so.

Is it disrespectful to the school, the teachers, and the child’s fellow students if he arrives late? If so, how “late” is late? Is being 2 minutes late okay while 15 minutes is not?

I’m not certain where I stand on that specific a detail, but I know one thing for sure: If my county government, backed by my children’s school, charged me with a misdemeanor crime for my children’s tardiness, I’d be outraged.

A couple in Loudoun, Virginia, was arraigned this past Monday for just that. The Loudoun County Sheriff's Office alleges that the couple’s three children—ages 6, 7, and 9—have been tardy too many times since school opened in September, and so they’re taking legal action against the parents. Officials with the Loudoun County Public Schools reportedly argue that they’re not to blame for the law crackdown since they’re simply following school district policy.

The husband and wife have each reportedly been charged with three Class 3 misdemeanors, which, according to Virginia law, each carry a maximum penalty of $500. So, this couple is looking at a fine of $3,ooo if found guilty.

What do you think? Isn’t this going way too far?

Take a Hike for Summer Learning

Stories at the Table

#1 ReadACP 2012-02-15 05:41
Yes, it definately is. I have also found that in most cases, lateness is due to too much homework. Children are set up to fail. Be on time, with out your homework done and get bad grades or... be a few minutes late, but 100 percent ready to start your day with assignments completed, but fine the parents for having concerned students who care about their grades. If your child wants to be in a sport or extracurricular activity, how else are they to finish homework without staying up late? And then the vicious cycle begins. Let kids be kids. Let them learn in school and stretch their muscles, make friends and gain confidence when not. Stop the excessive amounts of homework or start school later!
Refresh comments list
RSS feed for comments to this post