Should School Start Later for Teens? 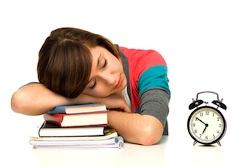 Ever try to wake a sleeping teenager? It’s a time-consuming undertaking that’s frustrating for everyone involved, especially on early morning weekdays before the sun is even up.

That’s the reality for many parents and teens Monday through Friday, in order for the teen to get to school on time—and we’re talking school start times between 7-7:30 a.m. For those who must catch a school bus, back up about 20-30 minutes earlier, and we’re talking the wee hours.

Take our Poll: Does School Start Too Early for Your Teen?

There’s been a fair amount of conclusive research and expert opinion that teenagers need more sleep rather than less.  [Listen for the applause and the “I told you so” looks from nearby teens.] But in many school districts across the country, school start time for teens—and even some middle school tweens—is getting earlier and earlier.

Since everyone is cost cutting these days, especially local governments and school districts, many schools say they’re starting earlier due to budget-friendly tiered busing schedules. This means that older kids—high school and middle schoolers—are picked up earliest, during the first tier of morning busing runs (they’re also dropped off earliest in the afternoon as well). Next come older elementary school students, and in the last tier are kindergarteners, who often are picked up by their buses as late as 8:30 a.m.

Do you struggle with getting your teen up and out the door 5 days a week? (Maybe more if your child has clubs, sports, and/or job commitments on the weekends.) And do you worry that your teen's lack of adequate sleep may be detrimental to his grades?

If so, take heart. Two women decided enough is enough and formed a not-for-profit organization to address the issue. StartSchoolLater.net, co-founded by Maribel Ibrahim and Terra Ziporyn Snider, Ph.D., is staffed by an 8-member steering board (the women occupy 2 of the 8 seats) and a 12-member advisory board, and advocates exclusively for later school start times.

More than simply presenting solid research findings and hosting the conversation, however, this group is seeking nationwide legislation to mandate that no public schools start before 8 a.m.

What do you think? (I know my high-schooler would heartily agree!)

“Experts” Give Advice to Kindergarteners About Becoming 1st Graders

SO YA
#4 jasmine cortez 2013-02-14 14:45
they should'nt cuz thats just outrageous
#3 Perla 2012-10-24 18:02
I think we should go to sleep later because people fall asleep in class
#2 Gioia Mapp 2012-02-22 18:54
Our high schools start at 7:17 am. I have watched my three children struggle with sleep deprivation once they entered high school. Each one became moody, indecisive and loose their love for learning because of the stress getting up at 5:30 am caused. Each one is an honors/AP high achieving student with a variety of extra-curricula r activities. It is heartbreaking to have them choose between sleep and perhaps doing less than optimal work (or even skipping assignments) because we adults have forced them into early start times for our convenience. I believe we are defeating high school students from performing at their best by early start times.

I have watched the older two who are now in college bloom again because they have class schedules which are more humane. They have fewer illnesses and are happier because they get more sleep. My last child is a high school junior and says he's envious of his sisters because they have more control over their schedules then he does. Very few college classes start before 8:30 am. Most jobs do not start before 8 am. So, why are we torturing our teens with these 7 am start times?

The research shows we are harming the health of our youth by early high school start times. High school has not been the enjoyable time of youth for my three children. I am proud of how they performed despite the sleep deprivation, but they have no love loss for these years. What a shame!
#1 Caroline 2012-02-15 21:57
In high school, I feel that we (high school students) need more sleep, and for school to start later. At my school, sometimes we're up until two a.m. or later finishing work that was only assigned that day, and four hours later I'm expected to be up and catching the bus. At school, teachers tell us to go to bed earlier, but we would if only we didn't have so much homework. I think school should definitely start later.
Refresh comments list
RSS feed for comments to this post