Attention Stay/Work at Home Moms: Is It Okay To Hire An Assistant? 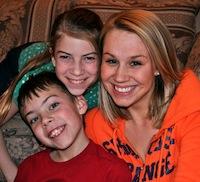 In my former life I was a molecular biologist. I know. Weird huh?

Except working in a lab is a lot like, well… cooking. Mixing up recipes (only much more precise than a dash of this and pinch of that), and growing vats of various bacteria and other stinky stuff.

But in reality, I haven’t seen the inside of a working lab since the turn of the century. The closest I get is laughing at the folks on CSI with their fancy equipment, pristine labs, and lightning speed with which they “sequence a human genome”...um yeah, NOT something that happens overnight people.

Yet try as I might to prevent it, I still find “science projects” growing in my fridge! Plus often you can find me experimenting on a new cake recipe, tweaking the ingredients just enough to fit my “dessert” hypothesis better. (I’ll be testing out a new banana/chocolate cake theory later tonight!)

I moved into full-time-mom mode when my oldest was about 18 months. Yes, I chose to become a SAHM. (Note: the recognizable abbreviation for "Stay At Home Mom" had not yet been invented.) Two babies later, and then two states later, my youngest was finally old enough to enter kindergarten. In case you’re confused, I am NOT one of the moms you’d catch outside the first day of class with tissues. No. I was more likely headed out the door to my well-deserved first day of school pedicure!

I have been “working from home” for the past 3 years. I’m thinking about having desk plates made that say: WAHM (Work At Home Mom). And my work? Well, I basically fell into this thing called blogging. I write on my own blog, GoodNCrazy.com. I’m also the “Good N Crazy Mom” blogger here at SchoolFamily.com, and I work with a handful of small clients, doing project management for their social media marketing. And I’ll be darned if I’m not having a total blast! Best of both worlds, as the saying goes.

I pay a tidy share of the family mortgage and last year my biggest goal was to buy (with my own money) a fabulous desk! (Check.) I’m enjoying it right now as I sip my morning cocoa and type away.

However, a problem has arisen in that my children’s afterschool needs are heavily eating into my “work at home” time. I’m talking carpooling and piano schlepping and late evening dinner delivery to starving teens at their play rehearsal! And my husband’s recent increase in whirlwind around-the-world travel has created a level of stress in my world that I can only compare to having a newborn again.

Fast forward to my husband’s suggestion: Hire an assistant. A what? Me?

But I’m a WAHM? We don’t need no stinkin’ help. We do it ALL. I create fabulous Valentine family dinners, I volunteer with Cub Scouts, I keep my daughters dressed modestly, and pay attention to their hobbies and talents. Isn’t it against the code of WAHM ethics to hire an assistant?!

A month ago, my husband was gone for 3 weeks straight. And it finally pushed this proverbial mom over the edge.

I hired Brooke, a college kid (pictured in the above photo with two of my kids), to help me out in the afternoons for a few hours twice a week. (WOW, who knew what kind of savior that would be?) Let me tell you, I’m a cheapskate; I make those paid hours SING! I get more done in 3 hours than several days combined at times. And knowing dinner is often started, dishes are tidied, and I’m not stressing because my freshman had a change in plans and needs to be picked up—“right NOW! Mom!”—is a huge relief on several levels.

Oh and no one’s complaining when cupcakes magically appear upon return from Scouts!

I’ve officially changed my tune. I now believe a home assistant for a WAHM who “thinks” she can do it all is the sweetest melody I’ve heard in months!

What do you think? Have I crossed over the unwritten stay-at-home-mom-rules?

Am I in danger of losing my WAHM “street cred”?

and Camille you make a really good point, why do we beat ourselves up for doing something for ourselves??

Yes she acts as a nanny, but also many other things, so I love calling her my assistant. I could even see a point where I have her come over BEFORE the kids come home from school to help with some of my work related things as well as my 'home' needs like groceries/light cleaning/cookin g.

Such a relief when i have several deadlines due etc.. (Or my husband is out of town and it just snowed 6 inches and the driveway needs to be shoveled! :-) HA!
#8 Camille 2012-02-25 18:11
Isn't that a nanny, part time? And why are we
asking if it's ok to get help? I am so happy that
as a woman, (mother, wife, n doer of all things well),
you are finding balance in your life with the things
and responsibilitie s that are important to you, but why
are we still struggling with these rigid ideas
of gender roles and expectations? It doesn't appear
That your husband needed to figure out any of these
Things, on his three week travels for work. And yes, getting
Someone to help you live the life of your design is fantastic!!
#7 Kathryn 2012-02-25 15:17
I'm just over a year into my WAHM career. Never thought I'd make this choice but I love it! I couldn't do it without my handful of local teenagers who often cover the 3:30-5:30 time. My son is happily entertained and I get some quality time at my desk. No risk of losing WAHM cred in my mind, it's just how it works best for my family.
#6 Carissa Rogers 2012-02-25 00:50
Thanks Mary, good point. :-)

I can multitask with the best of em, but the frozen meat I 'forgot' and left out in the garage for like 5 days a few weeks back.. shows that I'm doing WAY too much...
#5 Mary Davis 2012-02-24 23:27
You go, Carissa! An assistant would be such a welcome addition to my family, I can tell you that. So glad to hear the arrangement is working out well for you. You deserve it. If we worked at home, we wouldn't have child obligations going on. It's crazy to think that we can do it all at once.
#4 Carissa Rogers 2012-02-24 22:42
Thanks Emily, think about what you 'save' when you spend on an assistant?? And you're right about the evenings being SO much better, usually have dinner set out and she helps with partial prep of meals, heck I think she might be a better cook than I am!! :-)
#3 Carissa Rogers 2012-02-24 22:41
ha! Samantha I hadn't thought about a male assistant.. Yeah while my huz is out of town a lot I'm guessing he'd be happier with the female version as well!! :-)
#2 Emily 2012-02-24 15:57
This is fabulous! I'm a WAHM, too, and have often daydreamed about hiring a personal assistant. During one particularly crazy week I drafted a list of tasks for this imaginary person to complete. It sounds like the kids enjoy Brooke, and I think you're setting a wonderful example for them to follow in their (far in the future) adult lives! That is, to make having a sane, manageable life a priority.
#1 Samantha B Math and Literacy 2012-02-24 02:47
I think it's a great idea, and sounds well deserved. I think I'll look to do the same, and for my husbands piece of mind I'll look for a female university student as well... ;-)
Refresh comments list
RSS feed for comments to this post