Should Principals Have Control of Students' "Off Campus" activity? 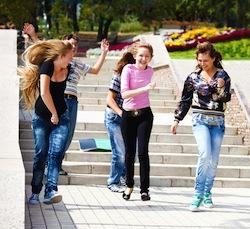 Most schools have rules for how students should behave while on school grounds, and many have a written code of behavior that students—and occasionally parents—are required to sign.

It's also long been the case that the off school-property behavior of students who hold leadership positions, play sports, or participate in extra-curricular clubs or organizations is held to a more rigorous standard. If the captain of the field hockey team is caught at a party where alcohol is present, for example, she is typically disciplined, often in the form of lost practice and game time.

However, many argue that legislators in Indiana have gone too far by voting to give school principals virtual 24/7 oversight of students and their activities.  A bill that received recent approval from the Indiana House of Representatives gives broad power to principals, allowing them to discipline any student for off-campus behavior that reflects badly on the school—in the principal's opinion.

Called the “Restoring School Discipline Act”—but referred to by some critics as the "Principal in Your Bedroom" bill—the legislation removes the “unlawful activity” clause, which is currently state law, thereby allowing principals to suspend or expel any student in grades K-12, for behavior or speech that could "reasonably be considered to be an interference with school purposes or an educational function," or when necessary to "restore order or protect persons on school property."

As vague as those conditions sound, the bill's sponsor, Republican State Rep. Eric Koch, insists the bill is ultimately about preventing cyber bullying (note that the term does not appear anywhere in the actual bill). “In limiting grounds for suspension and expulsion to only ‘unlawful’ conduct," Koch reportedly told a local newspaper, "current [state] law ties the hands of school officials to effectively deal with dangerous and disruptive behavior, including cyber bullying,”

Those against the bill, which must be approved by the Indiana Senate to become law, say in theory it could be used against students who speak out about something their principal deems detrimental to the school. Likewise, students who participate in an activity their principal feels isn't in keeping with the school's culture—say, a political rally; a particular summer job; even a student’s choice of attire outside of school—could be suspended or expelled.

Do you think this legislation goes too far? Once outside the school setting, do you think students should be beyond the purview of their school principal?

UPDATE: The bill has since been amended.  If it is approved by the Indiana Senate, a 14-member commission will be formed to study the issue further. However, the House must also approve the amended version.