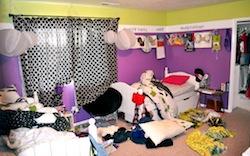 No one told me teenage girls are so messy! (And stinky?)

My oldest daughter is downright disgusting when it comes to her room and her laundry, and I’m scared to look under her bed. Her little sister (poor thing shares a room with the hoarding/moping/older girl monster), however, is a neat freak and the two DO NOT a happy shared-bedroom sisterhood make!! (The photo shown is an actual picture of my daughters’ shared bedroom. DO NOT TRY THIS AT HOME.)

Movies and sitcoms make it clear that teenage boys are the stinky ones, not girls, and so I was led to believe that:

Well, I beg to differ.

Girls stink. Sorry, there’s no easy way to share this with you. The teen thing sets in STRONG by 14 years old and a mom can nag and whine, but no matter how many showers—and despite industrial strength deodorant—there is still a just-woke-up, morning girl smell that could knock over a hippo.

I once heard a child psychology expert talking about teens and bedrooms. He said you really have to think about their rooms like hotel rooms. When you’re on vacation you aren’t there for the hotel room; instead, you’re all about the stuff to do in the city you’re visiting. And it’s like that for teens. Their bedroom often is simply a stopover and a refueling place for the next “thing.”

My teen lately spends more time at school and at play practice than at home (including sleeping). And since she has nowhere near enough time to do that plus her chores and her schoolwork, and spend time with the family—which is more important to me right now than a super clean room—I’m trying to let it go.

A lot of that will change, however, when her high school musical is over (they’re staging a production of “Anything Goes!”) We’ll get her back in all her smells-like-teen-spirit glory in a month, after the play!

So which is it, SchoolFamily.com readers? Do girls win the "Teen Disgusting Bedroom Award" or is it boys who have a corner on the reeking stench market?

12
#20 Guest 2016-01-04 17:47
All teenagers go through this, but they will out grown it somewhere in there late teens or early 20s they will learn to take pride in there surroundings. But at the moment pestering them will just lead to resentment.

If it bothers you there are a few things you can do, saying "tidy" or "clean" does not work but being specific and consistent.

1) Go out a buy a bin, laundry basket (not the one in the bathroom, an individual one for the bedroom, trust me)
2) Tell the children all dirty clothes must go in the basket. Don't let them eat dinner each night till this is done.

Second put a bin in there room, it will reduce the amount of trash in the room.

Lastly, make a clear rule no food in the bedrooms. Aside from this you are best accepting it as a rite of passage.
#19 Rene 2015-06-04 05:15
i had a French partner once in the past who was older than me and had 3 daughters who had to endure a strict regime of inspections and punishment with a cane if they transgressed.it really worked and all of them made sure rooms were clean and underwear also despite some natural situations
#18 julia 2015-04-07 14:28
First off if parents don't set rules and just let their kids do whatever its not the teens fault. You have to make rules for your kids because they are still learning at 14 too. My parents were never strict about me cleaning room before play by the time I was a teen. Also I found out now that I'm a parents I kept everything and I teach my daughter to give things away now so she has learned her needs and not be a pack rat like I wasn I'm not an expert on teens but my own experinces growing up i wish my parents pushed me to clean my room and also help me dejunk my room . I've been working on changing that habit for almost three years and wish I had learned this sooner now that I've been married for almost three years and im 37 years old and I'm so much better then I was then I was single living with mom and dad because they didn't make that a rule, yes I had a choice but other things always came first before cleaning my room and now with kids I have to do. I wish my parents helped me to nip that habit in the butt because I've struggled even now I focus on improving and I'm better then I have been because my kids need that example now asca mom and im step- mom and they never had order and rules and I have a responsibility to teach them so hopefully they won't learn the hard way like I have been later.
#17 Suz 2015-03-18 10:29
My teenage daughter is just like the one described above - she has her own personal landfill site! She also isn't bothered about taking off her make up, changing her pants (knickers) or even the state of her clothes - constantly goes around in dirty and holey leggings, bra worn for weeks, STAINED period pants left festering (I have asked her to put in a little tin bucket to soak in cold water in bathroom where her dad won't see). She rarely brushes her teeth too!!! Believe me I have asked nicely, not so nicely and even begged. I've offered to buy new school trousers/leggin gs - she is so totally not bothered. On the other hand she spends hours straightening her hair, and putting on makeup!!!! Yet she would sleep in dirty sheets forever unless I nag her to change them! Help! I love her so much. I have tried closing the door, but it drives me insane and knowing all the mess is in there makes me so stressful! Hubby lets it wash over him until there are dirty plates and cups upstairs; but that is the only time it bothers him. Our house is new and we take great pride in it - apart from her mess!
#16 Eileen 2014-10-01 22:48
In in reply to step father-be Rob( from my 11 year old daughter):
I have 3 things to say to you, Sir:
1. You shouldn't be talking about your stepdaughter-to -be like that. If your fiancee saw that, most likely you'd be out on your tush.
2. Even if she didn't help you, be a man. Stand up to her, saying, "Remember when I had back surgery, and how you didn't help me? There was once a little SIX YEAR OLD who helped her mom when she had major surgery. Without complaint, and cheerfully. Don't you think it would be nice if you helped around the house and cleaned your room?"
3. If your stepdaughter-to -be doesn't clean up her room in5 days, take away everything from her: boyfriend, friends, t.v., iPod, iPad, phone and limit her to these: 8 jeans, 8 shirts, 10 panties, 7 pairs socks, 2 pairs shoes.
#15 Bev 2014-07-01 10:31
Thank you. My miss 13 stinks too, I seriously thought there must be something wrong with her room !!! Turns out its normal .
#14 Craig Bystrynski 2014-06-16 14:32
If the smell is really that bad, maybe something did die -- possibly in the wall or under the flooring. A plumbing problem in the wall is another possibility. See if you can locate where the smell is coming from. Don't just continue to live with this -- it's likely to be quite unhealthy. And don't blame yourself. From your description, this is way beyond messy room smell.
#13 Maddie 2014-06-15 11:10
So I'm 16 years old, my room is the smallest in the house and before we moved here I was a clean freak, I never had to clean my room because it was always clean but since we've lived here I suddenly don't care! I tidy my room maybe once a month and it lasts for a week. The problem is my room smells really bad! I wake up and my dad will come in yelling that it smells like something died in here which actually makes me feel really embarrassed because I haven't done anything to make it smell like that! If I have food In my room it stays on my windowsill for a week until I take it out but even after that my room still smells. My mum said something about female hormones making it smell bad but I don't really understand and I don't think my dad gets it either! It's not like he goes in my room anyway! He comes in to ask me to make him food and that's it! Please can someone help me out! I don't know what to do
#12 John 2014-06-11 17:01
I'm sick and tired of people who were once dying to have kids, then now moan about them continually.

It;s like watching a dog "owner" being pulled along by an overly-powerful , untrained mutt.

To thos who dream of kids...don;t bother, they're more trouble than they're worth.
#11 jennifer 2014-05-30 03:33
Ok, ew, ew and MORE ewww? lol.
I am still at my age (17) an un-documented wroker meaning no green-card yet.
So I found this family promising to help me become US citizen, I have been working for them almost a year.
A friend told me about this postings here because I am STILL just a underpaid maid & have to put-up with so much. So as, TWIN teen sisters (15) who ARE as dirty and messy and uncaring as all I have read here.
They have frfiends over and laugh as I pick up their stinky laundry and so many other things after them.
To me this is no joke. This is SPOILED mean teen girls and if this is have i have to get my S citizen ok but I cannot take it much longer ok? AND other things I cannot talk about here like when they have their parties and drink their beer and all of that, and thank-you for hearing this, D
12
Refresh comments list
RSS feed for comments to this post