Why Do Some LD Students Act Out in School? 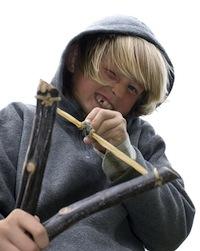 Recently, I read Nelson Lauver’s book, Most Unlikely to Succeed. The first part of the book was difficult for me to read. When Nelson was a child, he was abused by his teachers because he couldn’t read and do math.

Mr. Lauver tells the story of how he would do almost anything to keep from being called on and embarrassed in front of his friends. For example, when he was asked to read aloud in class, he would misbehave badly enough to be sent to the principal’s office. This most often resulted in him receiving harsh physical punishment with a paddle, or even worse—being locked in a totally dark room (“the vault”) for the rest of the day. This abuse went on for years. In fact it continued almost daily until he grew big enough that his teachers were afraid of what he might do if they mistreated him.

When Nelson was 29 years old, he was diagnosed with dyslexia, a specific language learning disability. For help understanding it, see my blog post How Do I Know if My Child is Dyslexic? Today, Mr. Lauver is a well-known “syndicated broadcaster, speaker, humorist, author, and master storyteller.”

The reason I bring up this story is to make the point that children with learning disabilities (LD) often misbehave in school. I have mentioned before that a child will tell me, “I failed because I didn’t study,” when he actually did study. This saves face because if he said, “I studied really hard but still failed,” he would be admitting he “is stupid.” These students really do feel stupid. They would much rather be, “the bad kid” than “the stupid kid.” So they act out and get themselves in trouble.

The truth is that learning-disabled students are bright! I have taught students whose measured IQs are a LOT higher than mine! Yet, they had been failing in school and needed specific strategies to help them learn in the school setting. Most of them, like Nelson Lauver, are talented and will do fine if they can just get through school.

If your child is frequently in trouble at school, consider the possibility that she has a learning disability. Ask the school psychologist for an evaluation and do it soon.

My Child has a Reading Disability: How Often Should the School Monitor His Progress?

How do I know if my child is ADHD?

#2 Livia McCoy 2012-05-08 01:19
Dear Ben, Yes, I do love his book! Another one that helps you to understand the gifts that go along with dyslexia is called "The Dyslexic Advantage" (Eide & Eide). I would also recommend it to all parents, teachers, and dyslexics!
#1 Ben McDonald 2012-05-01 12:30
Nelson Lauver's book is profound and should be required reading for every teacher. Parents, as well, should read it to understand why their child may be "acting out."
Refresh comments list
RSS feed for comments to this post