Is it Un-American To Dislike Little League...When It's Cold? 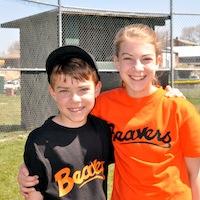 My children love Little League. Me? Not so much. I like watching them play baseball—I do. And I’m pretty sure it’s un-American to dislike Little League. It’s just that I’m a fair-weather sports mom. And I live in a part of the country where spring has a short memory, forgetting that even though daffodils already came up, snow often blankets us in June. (You may think I’m exaggerating, but last year it snowed twice in June! That may have been an anomaly. But old-timers swear it has snowed as late as July before.)

What I’m saying is that it’s rarely very warm here in April/May during peak Little League season. As a mom it’s already chaotic enough shuttling 3 kids to the other side of town for separate practices, games, and oh don’t forget—“Your turn at the concession stands.” Add to the chaos cold temperatures, possible rain, and often hail or snow, and you get a grumpy M-O-M who’s tired of Little League!

How do you enjoy a kid game when you’re sitting in a van keeping warm, while they are clearly freezing their chicken legs in the dugout? Do I have Mom Guilt that I’m toasty warm in the van? Yes! But no way am I sitting in the stands when it’s that cold.

Last Saturday was “Opening Day.” That means I was at the fields for no less than 7 hours. SEVEN.

But instead of bracing ourselves for the freezing spring weather (blankets, hot chocolate, warming up in the Mom-van between games), we experienced a strange phenomenon called A Warm Day. Complete with sunshine and above 80-degree temps!

We needed extra sunscreen, water stations, and I even got an umbrella to shade myself (did no good at all; I still came home completely sunburned where I missed putting on the sunscreen). We hardly knew how to behave. The kids complained of the heat and the sweaty gloves—never heard THAT before! And the concession stand ran out of cold beverages.

I was blissfully happy in my role as fair weather Little League mom. My voice turned hoarse from cheering during the triple-header. I wore flip-flops and now sport a sunglasses’ “raccoon” tan.

I’m sure we’re in for an arctic blast straight from Alaska next week, but until then…bring on the Little League!

Editor's Note: If you have a little ones who aren't yet old enough for Little League, have them use these fun, printable, baseball-themed worksheets. For other sports, including basketball, football, and more, use these sports-themed, printable, coloring worksheets.

Tags:
Carissa Rogers Extracurricular Activities SchoolFamily.com After-School
The Most Important Question You Should Ask Your Ch...
Making Friends From a Wheelchair Can Be Difficult ...

Going Solo on Halloween: A Salute To Single Parents Everywhere

Can we all move to San Diego please? :-)
#1 Dorice 2012-04-27 15:52
Loved your story, I can only imagine that type of coldness. I live in Las Vegas, it gets cold here, but I am sure, not like it does there. Our season is done until June, I miss it already. Bring on the 100 degree heat, I will have my umbrella and water ready to go. I am not a fan of humidity, which we don't get to often here...dry climate, it's all good, Lets Play Ball.
Refresh comments list
RSS feed for comments to this post