Mother Arrested For Cheering Graduating Daughter, But There's More To the Story 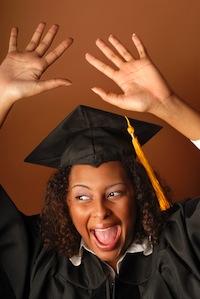 A mother who says all she did was cheer for her daughter as the young woman graduated from high school last Saturday was arrested during the commencement ceremony and charged with disorderly conduct.

Sounds like the mother’s crime was innocent enough, doesn’t it? Cheering on your child as she walks across the stage during commencement to receive her diploma? And then arrested for it?

As is typical, however, there appear to be two sides of the story.

Local police say they announced to those gathered for the South Florence High School graduation at the Florence Civic Center in South Carolina last weekend that shouting and/or screaming would not be tolerated, and warned that those who did so would be removed from the building.

In an interview with WPDE/CarolinaLive, the online site of a local news station, the mother, Shannon Cooper, said she yelled, “Yay, my baby made it, yes!” She then said, “How can I not cheer for my child?”

However, an online comment about the incident, posted below the story on the news station’s website, was written by a woman who says she was at the graduation and included this statement: “I was there and first let me say that at the beginning of the ceremony it was told to us that it was the students [sic] wishes that there be no cheering and they wanted this day to be about them.”

Another comment on the same story made by person who also said she was at the graduation, read in part: “…the news needs to be corrected [sic] they never said they would throw people out…The principal said exactly…The senior student body voted and it was agreed upon by them that they would like for this graduation to only be about the student [sic] and not their parents or families…If you do not follow these decisions you will be removed from the ceremony…”

While police wouldn't comment on Cooper's arrest, they told the news station that people who became disorderly while being removed from the building were arrested. Cooper’s graduating daughter, Iesha Cooper, 18, said she witnessed the whole thing. “That's all I can picture,” Iesha told the news station, “me crying, looking at the police van knowing my mother is in there.” The mother also said she was held in a police van outside the building for a long period before being taken to the station.

What do you think? Would you loudly cheer for your child during a graduation ceremony? (Perhaps you have!). What if you were warned beforehand that doing so would lead to your expulsion? Or, do you feel instead that a commencement ceremony is a solemn occasion, and that parents cheering and shouting to their graduating children is inappropriate at best and downright rude at worst? Please comment below and share your thoughts!

Tweet
Tags:
High School
Potty Training: Can We All Just Lighten Up?
Laughter Can Lift Spirits: Fond Remembrances From ...

Some Changes to the PSATs and SATs

Be Careful Not To Let Your Teen Get Overbooked