The Honor of Winning the Meanest Mom Award 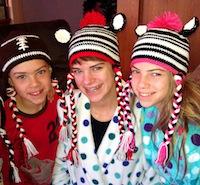 The sweetest words any mom will ever hear: “Mom, I’m so glad you told us NO when we were little, and you meant it!”

I did a complete double take when I heard them. We were in the car, and I may or may not have zigzagged around the freeway while I recovered.

You’re what? You are GRATEFUL I’m so mean? Is that what you’re saying?

This quote is from the Facebook page of Erin Hampton, a friend of mine:

“It would make my life easier if my daughter's circle of family and friends had the same opinions that I do, LOL. She just doesn't understand why at 9 p.m. she can't [read the] Twilight [series] or watch [the] The Hunger Games, etc., and I am just a Mean Mom because ‘everyone else's Moms are letting them watch the movie or read the books.’ UGH”

Erin said that after she wrote it, about 100 people wrote comments with kudos and statements like, “Here, Here! Keep up the good work, Mom!”

I agree with Erin. My middle daughter is 11 and she hasn’t even watched the whole set of Harry Potter movies yet because the later ones are so graphic. (And we generally stick to the PG-13 ratings, waiting until they are 13 to consider watching.) The Twilight books are a long way away for her (make that both the books and the movies). However, she just finished reading The Hunger Games series…so will we let her see the movie?

I also agree with Erin about the “Meanest Mom On the Block” syndrome when your kid realizes that “friends” are allowed to do something, wear something, or attend something that she most definitely is NOT allowed to do, wear, or attend.

Is it worth sticking to your “Meanest Mom” guns? I say yes. Helping your kids understand the importance of modestly dressing and staying away from inappropriate images is totally worth ignoring the rolling eyes and tween whining. You’ll be as grateful as I was after the above “thanks for saying NO” comment.

BTW, that comment came after a friend’s 12-year-old spent the better part of a half hour throwing a complete knock down tantrum because his mom said no to a request. My kids and I were witness to the tween nightmare. Did I mention he was 12?! I was appalled, but didn’t realize how intensely my children internalized that moment. They clearly realized a big kid in tantrum-mode isn’t pretty. In fact they were grateful for a mom who loves them enough to say no.

I’ll take the “Meanest Mom” compliment ANY day of the week!

Because that’s how much I love my children.

How mean do your kids think you are?

Tweet
Tags:
Parenting Carissa Rogers
Get Your Child Ready for Kindergarten With Common ...
Kids With Learning Disabilities Are Actually Quite...

Jumping on The High-Maintenance-Mom Treadmill

"Yes, Virginia—Grades Do Matter" Or, My Attempt to Make My Kids See It This Way