Improve Math Skills With a Deck of Cards 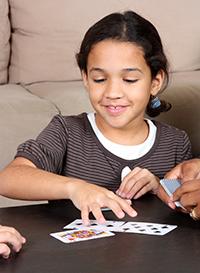 Looking for a quick, fun activity to help young students improve math skills? Start with a deck of playing cards!

Here is a simple, engaging, and fun game to increase your child’s mental math ability. Children in kindergarten through 2nd grade in particular enjoy this game.

Right Before and Right After

This game can be played with two to four players.