With Learning, It Doesn't Matter How Long It Takes 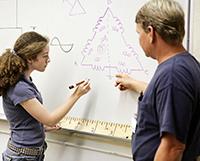 Last week, I wrote about grades and what they really mean. Do they really reflect actual learning? Teacher Ron Simmons tells a story in his math classes at Hilton Head Prep School. He shares this with his math students when they tell him they’re not good in math.

They begin to talk about when they learned to walk when Mr. Simmons says, “What difference does it make? You all are really good at walking now. Does it really matter when you learned as long as you finally did learn how?”

He then relates this story to learning math. He says that some students learn it really quickly and call themselves “good at math.” Others take longer. They might even take a really long time to finally get it. Once again he asks the question, “What difference does it make how long it takes to learn it? As long as you learn it in the end you will all be “good at math.” Then Mr. Simmons and his students get down to the business of learning math.

I really love this story because it is such a great illustration of how we should be thinking about the purpose of school. It also points out that all children are not exactly alike. Some catch on quickly in history but not so quickly in science. Others struggle in English or with grammar. All children need to be encouraged to keep trying. They need to know that failure is an important part of life, and that a strong work ethic is a great predictor of future success. They also need to know that it doesn’t matter how long it takes to learn a skill as long as they eventually do learn it. Everyone can be “good at math” if they work hard enough and keep on trying.

Executive Functioning -- How it Affects a Student in School

Special Fonts for People With Dyslexia

Teach Kids To Be Active Listeners