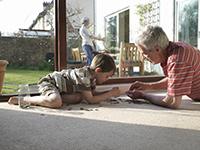 Using the combination of dice, pennies, and writing number sentences is great because it combines a visual with a hands-on component. Games such as this help young children become secure and fluent in addition and subtraction. “Fact Power” fluency builds math confidence for young students as they learn more advanced math!

Your Child’s Teacher Is Thankful for Your Help

You Can Be Good at Math, Too!