Over-Praising Your Kids Can Hold Them Back 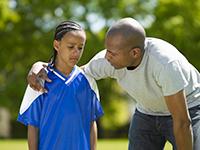 In her new book, Getting Real, Gretchen Carlson tells a story about her son. His hockey team had just won a tournament, yet he didn’t seem as happy as his mom expected him to be. He told her that everyone on the teams got the same medal—even the fourth place team received the same medals as his team did. This has been a common practice for many years in children’s sports, because parents do not want their children to be disappointed or to experience failure. Carlson goes on to say, “Losing is hard, but it’s as important for kids to experience having to cope with failure as it is for them to win. When we praise mediocrity and give everyone a trophy, children don’t learn how to deal with setbacks.” When children are protected from ever experiencing failure or disappointment, they might feel they don’t need to work as hard. It doesn’t matter as much, because the end result will be the same.

Here are some ideas for ways to encourage your children to do their best in all situations.

Parents can help their children learn to work hard. Learning to praise only when it’s well-deserved is an important step. Teaching them to be resilient—to keep trying even after a failure—will help them understand the need for hard work. Finally, parents can help their children set reasonable goals and encourage them to work hard to reach their goals.

Tags:
Connie McCarthy Social and Emotional Development
Math Fun for Summer (or Anytime)
Make the Most of Your Child’s Intrinsic Knowledge

Lessons on Respect From To Kill a Mockingbird

Graphing for Reading and Math Fun

Why Sports Can Help Kids With School

Helping Teens Make Their Own Decisions