Join our bloggers as they share their experiences on the challenges and joys of helping children succeed in school.

A Case for Teaching Handwriting in the Digital Age

Until a friend described a recent visit with his middle-school-age grandson, I had no idea of a debate raging about the teaching of penmanship. My friend told me, “I got tired of his being in some alternate universe with his electronic gadgets, so I decided to try involving him in something else.” He asked the boy to put aside his handheld gadget so Grandpa could teach him some practical stuff, like filling out a bank deposit slip. He showed his grandson the form and began explaining how to fill it out when the boy interrupted with, “I don’t do cursive.”

My friend’s annoyance reemerged when he told me about the encounter, and my amused response didn’t help. But when I thought about it later, I decided that doing away with cursive really wasn’t funny. What I assumed was bedrock education in elementary schools is no more because some schools no longer include cursive writing in their curriculum. Until my friend’s rant about schools’ failure to teach the basics, I was unaware of the ongoing controversy in educational circles about what was once called penmanship. I was surprised to learn that seven states, including California and Massachusetts, have filed legislation to implement penmanship as a permanent part of their school curriculum.

There are logical arguments to support its demise. Some teachers insist it takes too much time to teach when there are more important things for kids to learn. Skills involving keyboarding, they say, will help their students succeed in school and in careers more than cursive would. In a Washington Post article, Michael Hairston, the head of the country’s largest teachers union, the Fairfax Education Association, calls penmanship “a dying art that has been replaced by technology,” emphasizing that teachers need to make hard choices, given time constraints “and little or no flexibility.” He also said that much of teachers' instructional time is dominated by the need to teach to a standardized test. In an article called “Forget Cursive: Teach Kids How To Code,” author Keith Wagstaff questions what an 8-year-old’s future boss “[is] going to be more impressed by, the ability to write cursive or to code?”

As for me, I’m firmly on the side of continuing to teach our students to read and write cursive. My conviction is partly based on my own experience teaching high school students to write essays demonstrating critical thinking about the literature they were reading. Much of my after-school time was spent writing detailed comments and suggestions in the margins of the essays, the closest I could come to one-on-one teaching in my crowded classrooms. If I had to print my recommendations—something I do slowly and poorly—I would have struggled for many more hours to finish the essays promptly and return them. No matter how elegant the fonts and professional looking their printed work, my students welcomed the handwritten suggestions for strengthening their writing skills.

Cursive is also an effective tool in teaching students with dyslexia, experts say, because all the letters start on a baseline and move fluidly in the same direction, a help to dyslexic learners. A number of research studies also suggest that more areas of the brain are engaged when students use handwriting rather than a keyboard.

What about those occasions when the computer is down but the work has to go on? Business won’t stop because no one knows how to read or write without a computer. And think about all those practical needs for our writing, from signing checks to putting our names on electronic devices when we use credit cards. There are those inevitable forms to be filled out in doctors’ offices, our signatures on drivers’ licenses and, more personally, on birthday cards. At times in our lives when we need words of comfort or encouragement, who doesn’t feel a special warmth in receiving a handwritten note?

As educators and academics respond to the challenges of our technological society, their debate about the merits of teaching penmanship will undoubtedly continue. I’m on the side that hopes, like my indignant friend, that kids will continue to learn cursive.

Writer and educator Anne G. Faigen is the author of several young adult and mystery novels and a former high school English teacher in the suburban Pittsburgh area. 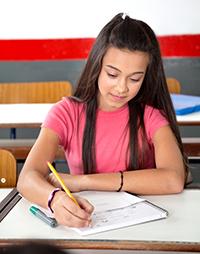 For most of us, summer vacation seems like it was ages ago. We are going full force at school. Students are already working on daily homework and long-term projects. English teachers are teaching their students the writing process—prewriting, drafting, revising, proofreading, publishing. This process is so important to use for all writing assignments, yet often students do not do it.

Many students do not thoughtfully plan out what they are going to write. They simply start writing and whatever ends up on the page is what they turn in. The problem with this is that it usually lacks organization, and it is unclear what the point of the writing is. A much better process is to start out by brainstorming the topic to look for patterns and links between ideas. (Brainstorming is one form of prewriting.) In that way, students can choose a thesis and decide how to organize the paper so that it makes a strong point.

The other part of the writing process that students tend to skip is the proofreading stage. When I read my own work, it is so easy to skip over an error because I know what I wanted to say and think that’s what is on the page! When I use a text-to-speech reader to read back what I wrote, I can much more easily hear my errors. There are free readers available on the web. Check out my earlier blog on text-to-speech readers.

Encourage your child to go through all the steps of the writing process. In this way she will turn in her best work and her writing will improve.

You might also enjoy reading Eight Steps to a Strong Paragraph  and Editing Checklist Can Help Improve Your Child’s Writing. 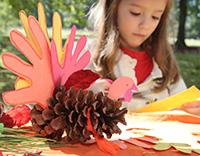 Young students should be able to write, or at least copy, short notes. What better opportunity to hone their writing skills than sending thank-you notes in the days prior to Thanksgiving?

Brighten someone’s day by helping your child send a simple, handwritten thank-you note.  What could be more heartwarming than receiving a personal note from a young student who is just learning how to write?

Likely recipients could be:

“Thank you for being a wonderful grandmother. Happy Thanksgiving!”

“Thank you for being a special uncle. Happy Thanksgiving!”

“Thank you for taking such good care of me. Happy Thanksgiving!”

“Thank you for watching over us. Happy Thanksgiving!”

“Thank you for your hard work. Happy Thanksgiving!”

“Thank you for being a wonderful neighbor. Happy Thanksgiving!”

“Thank you for teaching me how to write. Happy Thanksgiving!”

In addition to helping your child practice her writing skills, you will be strongly reinforcing the true meaning of Thanksgiving.  It’s not about turkey dinners and football games; it’s about families gathering together and giving thanks for their blessings.

Thank you, School Family readers, for your interest in my writing…Happy Thanksgiving everyone!

Children love the spontaneous fun and pure joy of summertime.  While the end of summer is bittersweet, now is the time to help your child capture wonderful summer memories, while practicing writing skills for a new school year. To do so, you will need plain 8 1/2 x 11 paper, pencils, markers, and/or crayons.

If your child is going into kindergarten:

If your child is going into 1st grade:

If your child is going into 2nd grade:

Save these “Summer Memories” in a family album or scrapbook. On a cold, dark evening next February, bring them out to rekindle warm summer memories!

Try to do this each year. When your children are young adults, they will thank you so much for keeping their summertime childhood memories alive.

Who else seriously needs a break…from summer break?!

Parents always worry about the education “brain drain” during summer vacation. And, like us, when you aren’t home to keep up on reading, writing, and ‘rithmetic, how do you keep more than a few facts from slipping out of your kids’ brains?!

That said, the Rogers family departs once again, heading out for our last vacation before summer ends. This time it’s to NJ for a beach visit to the Garden State, where we used to live. School for the goodncrazy kids starts in a few short weeks so there literally won’t be time to stuff their brains with educational catch-up once we return.

Not a problem, however.

We plan to create educational experiences and plug the brain drain without them even knowing it!

5 Ways to Sneak in Education While on Vacation!  (Shall we call it Edu-Vacationing?)

Summer is winding down fast for us. And yet many of my friends across the country are already in school!

What did YOU and your family do for summer vacation?

Editor's note: Check these SchoolFamily.com articles about other ways to prevent summertime "brain drain"and keeping kids fit and active during the summer.