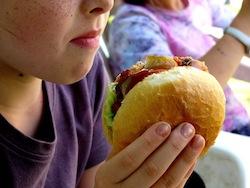 When ABC News ran a program earlier this month on the use of so-called “pink slime” in USDA-approved ground beef, it created an overnight panic, especially among parents who wondered if the beef by-product is used in their children’s school lunches.

Turns out they were right to worry.

After the ABC report went viral on social media, a Houston mother who writes The Lunch Tray Blog launched a petition on Change.org, asking the USDA to stop the use of LFTB in its National School Lunch Program.

The petition has collected close to 250,000 signatures. More importantly, the public outcry by parents and others concerned about the beef consumed by American schoolchildren led the USDA to announce March 15 that it will offer school districts the ability to order beef products with—and without—LFTB this fall.

The statement from the federal agency read, “USDA only purchases products for the school lunch program that are safe, nutritious and affordable—including all products containing Lean Finely Textured Beef. However, due to customer demand, the department will be adjusting procurement specifications for the next school year so schools can have additional options in procuring ground beef products. USDA will provide schools with a choice to order product either with or without Lean Finely Textured Beef.”

As news about LFTB spread, many national grocery chains have come forward admitting that they sell ground beef mixed with LFTB, and many of the major chains have  announced that they'll no longer do so.

What exactly is so-called “pink slime” or LFTB? It’s the trimmings—also known as renderings—from large cuts of beef which are sliced off, “finely” processed in machines that separate the fat that’s attached, then heated to remove any remaining fat, and then treated with ammonia hydroxide.

Incidentally, the man responsible for the term “pink slime” is Gerald Zirnstein, a former microbiologist at the USDA’s Food Safety Inspection Service. He reportedly came up with the term after touring one of four plants owned by Beef Products Inc., based in South Dakota—the producer of LFTB—and later told colleagues that he didn't consider the product to be beef.

Do you know if your school district or state uses ground beef mixed with LFTB? Will you try to find out? What’s your take on this whole "where's the beef?" controversy?

Editor's note: For healthy, nutritious school lunch and lunchbox ideas, visit our new SchoolFamily.com Recipe Share. Do you have a good recipe you'd be willing to share? Send it to us and we'll include it on our site!

What Is a Language Learning Disability (LLD)?

Valentine's Day Activities and Crafts To Make With Your Kids

#5 Regina Corley 2012-04-04 18:55
So quick to blame the school! Districts get what they get. The issue is with the USDA. Very few school districts can afford to snub the School Lunch program so they receive what they are given - and the USDA isn't talking; except to remind us it is "safe."

It is all fine, well and good to preach local and organic but school districts are struggling to keep the lights on and teachers in the classroom (thanks to school funding formulas and state/federal funds hoarding) - choosing to eschew federal dollars and commodities is not an option.
#4 Tom 2012-03-31 22:12
Do you think anyone in schools has any idea what is in the government surplus food they order? Processed beef, chicken,cheese, potatoes. Schools assume the products they buy are safe to serve. Why they do is a mystery. Commercially raised livestock could be argued to be unsafe in any form or cut of meat, let alone when ultra-processed "slime" is added to it. People with real concerns about their children's lunch should prepare and send a locally grown, organic meal themselves and stay away from the lunch line altogether.
#3 Veronica 2012-03-30 13:55
Where's the beef in my child's school lunch? Hidden amid the mass quantities of bread, crust, coatings other high-carb, empty calorie food stuffs.
#2 Amanda 2012-03-30 02:58
This is disgusting. I know our schools are trying to save money but they should at least let parents know things like this instead of us finding out on the Internet. I think a lot of parents would rather pay a little more for school lunches knowing they are better quality.
#1 Roxanne 2012-03-30 01:55
Yes they need to inform us if its not only in the lunches but the stores we purchase from need to stamp it or something so we know.
Refresh comments list
RSS feed for comments to this post