Of Funerals, Family Commitments, and the Needs of Teens 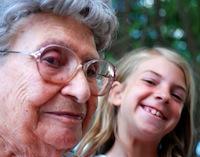 My grandma passed away last Friday. And worse, I missed her funeral.

It’s not as bad as it seems. I’m sad of course; literally, as I type this, her funeral is taking place more than 12 hours away in another state. She was emotionally in a lot of pain and while I’m upset to miss the funeral, I’m relieved to think about her in a better, happier place (btw, that's her in the photo, with my younger daughter).

The thing is…our family had enough notice to plan to attend. We have the gas money and a working vehicle. We could stay with family for a night in between the funeral and driving.

But. We’ve come to realize we are now “teen-parent-people.” And when you are the parents of teens you learn (sometimes the hard way) that their events and their timetables often trump the family’s plans.

It reminds me of a poem a friend recently shared with me:

Back in February over President’s Weekend, we were set to get away for a couple of nights. My husband was exhausted from work and we all needed a break to just be a family. However, my daughter’s play practice kept us from going. She swore up and down she would be kicked out of the play if she missed the “special” extra practice on Monday. (Who does that, by the way? Holds play practice on a holiday?)

We debated— leave her home for the weekend with friends we know and trust? Fight it out with her director? Get the principal involved? Insist she not be punished for a weekend our family sorely needed?

In the end I had a mother’s epiphany (they can be very painful, I’m warning you): I realized this play was her WHOLE life right that second. And while it seemed small compared to the overall family picture, it wasn’t small to her. It was huge to her.

“…because to them all of it has always been big stuff.”

We decided to stay home that weekend and we managed to find plenty of family time and renewal right in our own home.

I tell you about February because this past weekend, as we plotted to attend the funeral, we realized the oldest kiddo had a state band competition the morning after the funeral. No matter how we sketched it, the best we could figure was leaving the funeral early and driving straight through the night (no potty breaks allowed), getting home at 7 a.m., with less than an hour to spare for her to catch her band bus.

The other option was to leave her home with friends. And again, we couldn’t do it. I never want to be the parents who leave a teen behind while the family goes off to play…or even to mourn.

The question is: Did we sacrifice a family need for the teen’s need? I don’t think so. I think events will eventually arise where the teen’s universe will not trump the family’s need. And we’ll make that decision as it comes.

But for now, we’re ‘teen-parent-people’. We choose to let the big stuff in their lives rule our “stuff.”

Soon enough our kids will be grown, and dealing with their own kid’s stuff.

Going Solo on Halloween: A Salute To Single Parents Everywhere

The truth is it was a big family weekend right before the funeral and parents were in town for my youngest's 8th birthday (which is a big religious year for us).

And my husband had to fly out to a work commitment on a flight earlier than my daughter's band bus so that was a double whammy...

As for driving alone... it was over 14 hours and I just can't do it. I'm a big driving baby, but it would have left my little kids to have to come up with childcare for a day at least as well!

So much was against us. :-) I did send in a written memory of my grandma that was placed in a memory book for guests to read.
Sigh... was very hard to miss, and harder decision to make.
#1 Christy 2012-05-17 05:19
Hmm. We don't have teens yet, but I'm not sure I entirely agree with you. I don't know your family dynamics and I do remember the feeling that whatever was happening in my life was the BIGGEST thing at that age. But I think my parents did a good job of teaching me that what was happening in my life was NOT the biggest thing. It wasn't the smallest thing (even when it probably seemed that way to them), but there were times when the family stuff trumped my big stuff. I think it's a fine line to walk with kids between making them feel important and empowered and allowing them to think the world revolves around their needs. I'm pretty sure a family funeral would have trumped everything in my house growing up. That said, I think I would have gone to the funeral and left my husband home with the kids to deal with their stuff. Funerals are often more about supporting each other than about the person who passed on. I think that concept is important for teens, too. Sometimes things happen in our lives that put everything else on pause and even if it sucks, you do the right thing and make a sacrifice. It seems like you're at peace with the situation, though, and that's what's important!
Refresh comments list
RSS feed for comments to this post