It’s important to keep kids’ minds active during school vacations. These fun activities are designed to help kids learn during your family vacation, whatever time of year it is and wherever your destination may be.

When your family hits the road for a vacation, the last thing your kids want to do is review math lessons. Still, there are plenty of ways to engage their brains during your travels without it feeling like school. The key is to make it a game, with a heavy emphasis on fun over academics.

The activities below can be done in the car, on an airplane, or at your vacation destination. Some of the games require advance planning and a few supplies. Others can be done on the spot.

Go on a scavenger hunt: Give your kids a list of things to look for, and see who can find the most items on the list within a set time period. For example: a restaurant that starts with the letter “P,” an animal that walks on four legs, a car with fuzzy dice hanging in the window, a car with a dog inside, a bus stop, a green van, a detour sign, and a sign with the word “yes” on it.

Listen to audio books: Choose a book the family will enjoy and listen to the audio version while on the road. Stop the recording occasionally to discuss the story. To get the conversation going, try writing questions in advance and having the kids draw one from a hat. You can tie the book selection into your destination. For example, if you’re driving through northern California, you might try a John Steinbeck classic.

Search for numbers: Numbers are everywhere. Have your kids look for them on signs and write down each number and where they saw it. Set a timer. When time is up, players add up their numbers. The one with the highest number wins.

Play trivia: Make up trivia questions in advance based on what your kids learned during the previous school year. Call out the questions and award points based on difficulty. If the child who studied the material misses, give other passengers a chance to answer and give them double points if they answer correctly. Choose a range of easy, medium, and difficult questions.

Have a sing-along: Instead of each family member listening to her own music with headphones, make a trip CD with each person contributing a few favorite tunes. Add songs related to your destination. If you’re heading to the South, try Paul Simon’s “Graceland” and Arlo Guthrie’s “City of New Orleans.” If you’re going to the mountains, try John Denver’s “Rocky Mountain High” and Alabama’s “Mountain Music.” Talk about the lyrics and what they might mean. On the way home, make up songs with your kids about the trip and the places you visited.

Make pipe cleaner sculptures: Bring an assortment of colorful pipe cleaners, available at craft stores. Challenge your kids to form letters and numbers with the pipe cleaners, spelling out words and solving math problems that you call out. They can use their imagination to sculpt people, animals, and objects. Try to guess what they’re making. If you’re stumped, ask for clues.

Play cards: If your kids aren’t familiar with the old standbys such as Crazy Eights, Old Maid, and Solitaire, teach them. For an added challenge, try math Blackjack. Take out the face cards in a deck of cards. Let each child pick three cards each turn. Each player tries to get the closest to 21 without going over. As they master the game, add the face cards back and give each one a value. Keep the game interesting by changing up the value, declaring one card wild or making one card wild if paired with a card that equals a certain number.

Put on a puppet show: Get crafty with airplane barf bags. If you can’t find one in the seat pocket in front of you, ask the flight attendant. Use crayons to make puppets based on a story or on the family members you’re going to visit. Then use the puppets to tell each other stories.

Create a secret code: Before your trip, brush up on the history of secret codes. Challenge your child to create a code by giving each letter or commonly used word a symbol. Then see if you can communicate with the code, passing notes during your plane ride. Talk about when a secret code can come in handy and uses of secret codes throughout history.

Make a journal collage: Grab schedules, travel brochures, and anything else you can pick up for free while in your destination city. During downtime, cut, paste, and write to create a collage together to serve as a record of your adventures.

Get into maps: During your trip, give your kids chances to read and interpret maps whenever possible. Ask your children to make their own maps showing anything from the route from your hotel room to the pool to the way from your hotel to a favorite breakfast spot. An ambitious child can map out the whole trip. Encourage kids to draw their maps to scale using a key.

Explore a book: Suggest a book for the family to read together before or while traveling and visit places mentioned in the book. If the book is set in a different time period, discuss how the setting has changed. For example, Harriet the Spy, by Louise Fitzhugh, is set in New York City; Katherine Paterson’s Bread and Roses, Too is set in Massachusetts; and Tangerine, by Edward Bloor, is set in Florida. If your kids resist the idea of reading a book of your choosing, watch as many movies as you can set in your destination city, including those set in the past.

Play with seashells: While at the beach, collect as many seashells as you can. Put them in a bucket and have everyone estimate how many there are as well as take a random guess. See who gets closest without going over and whether estimating or making random guesses yields a more accurate result. Then sort the shells into categories by size, shape, and color.

Make news: Record a video of your child acting as a newsperson and telling viewers about the significance of your destination. Then, switch roles and have your child do the recording while you act as the newsperson.

Take a ride: Use rides at an amusement park to reinforce science concepts like gravity. Talk about how a ride might work, how its design makes it functional and safe, and which science concepts the inventor had to consider.

Convert currency: If you’re traveling to another country, your kids can help you figure out how much things cost and whether they’re a bargain or a rip-off. Challenge your kids to convert from U.S. dollars to the currency in the host country and vice-versa. Talk about factors that influence the strength of the U.S. dollar and how that impacts tourists.

These are just some examples of how learning can fit into any vacation with kids of any age. Older kids might initially groan, roll their eyes, or consider your games and activities too corny. But free from distractions at home, such as television, computer, and video games, even your older children just may come around and be more game than ever to play along. 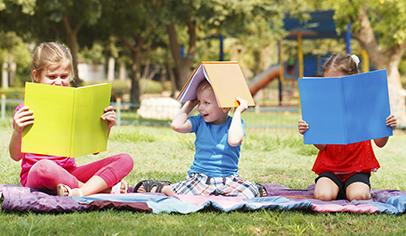