10 Questions Parents Should Ask About Concussion Management in Youth Sports

As more becomes known about the short- and long-term damaging effects of traumatic brain injury due to concussion, parents of student athletes need to educate themselves about potential risks facing their young players. Our information helps parent know where to begin.

Go to any soccer or football field on a weekend, and you will see how important competitive youth sports are to kids and their families. An estimated 41 million kids participate in a wide range of sports, with some starting as young as 5 years old. As participation continues to increase, especially among younger kids who are still physically developing kids, risks of serious head injuries will also occur. In fact, one in five traumatic brain injuries today—most as a result of concussions—happen among children during their participation in youth sports.

As a parent, learning about concussion causes, symptoms, and treatments is critical to keeping your child safe. Concussions by definition differ from other sports injuries, not just because they’re difficult to detect and treat, but also because they are a significant problem. In fact, the Centers for Disease Control and Prevention estimates that 1.6 to 3.8 million sports-related concussions occur in the United States each year.

More than 35 states have enacted laws about “concussion management,” but so-called “return-to-play time requirements” aren’t currently mandated, nor are they expected to be. Some experts say this is because each injury and each player are unique and therefore require a different return-to-play plan.

That said, a new medical consensus statement recently released from the American College of Sports Medicine might help. The statement reads, in part, “Under no circumstances should an athlete suspected of, or diagnosed with, a concussion return to play the day of their injury.”

For all parents, particularly those whose children participate in “club” sports—private youth sports organizations not affiliated with public schools—the best protection is education. Until concussion management programs become a de facto standard in all youth sports, parents need to self-educate and advocate for the safety of their children. The following 10 questions about hypothetical youth sports situations can help:

Concussion laws vary from state to state, so check your own individual state laws for the requirements. You can find an online summary of all state laws at Safe Kids. Also, the Centers for Disease Control has a program called Heads Up: Concussions in Youth Sports, with information on concussion symptoms for coaches, athletes, and parents. Many youth club sports programs use this information as a basis for concussion education and training.

2. Which club sports have taken steps to provide concussion education and training to coaches and parents?

Pop Warner Football, USA Football, US Youth Soccer, and USA Hockey are club sports organizations that have taken proactive steps to provide their coaching staff—and parents of players—with concussion information. In September 2010, Pop Warner, one of the oldest and largest national youth football organizations, became the first youth sports organization to introduce its own concussion law. American Youth Football, according to AYF president Joe Galat, began calling attention to the issue of concussions in 2000 in safety guidelines and leadership meetings. And in 2010, Dr. Michael Stuart of USA Hockey, together with the Mayo Clinic’s Aynsley Smith, led the first-ever “Ice Hockey Summit: Action on Concussion,” at the Mayo Clinic in Minnesota, to specifically address the increase of concussions among youth ice hockey players.

3. Have club sports made any changes to prevent concussions during training?

Recently, Pop Warner made significant changes in their training as the result of a study on head impact exposure in youth football. The study, conducted by Virginia Tech-Wake Forest University’s Center for Injury Biomechanics, used Head Impact Telemetry systems to monitor youth football players, ages 7-8. Embedding accelerometers inside the players’ helmets, researchers recorded a total of 748 impacts with an average of 107 impacts per player—some with impacts greater than 80g forces.

Because of these results, Pop Warner changed its rules to limit full contact scrimmage during practices to no more than one-third of practice time, and prohibited drills where players line up in scrimmage to more than three yards apart. Virginia Tech-Wake Forest is doing similar studies with American Youth Football’s Piedmont Conference located in North Carolina.

4. My daughter’s sports league does not have an athlete trainer or physician available for games. Are they legally required to have someone there?

The majority of club sports organizations are not required to have an athletic trainer or a physician available during games and practices. Instead, each organization’s own certified or licensed health care provider(s) must evaluate injured players. Some organizations like Pop Warner and USA Hockey require that a player can only return to play with a signed release from a licensed medical provider, typically the child’s own doctor.

5. My son suffered a concussion, but his coach went ahead and played him in the following game. How soon should my son have returned to play?

Returning to play after a concussion has always been widely debated. Since most clubs don’t have an athletic trainer or a physician available, they require a decision by the player’s personal physician. In 2011, the American Academy of Family Physicians, the American College of Sports Medicine, and multiple physician organizations sought to clarify this by issuing Team Physician Consensus Conference Statements on an athlete’s return to play. The concussion consensus statement reads, in part, that an injured player should not be returned to play on the same day that the injury occurs. Those involved say that the goal of the consensus statements was not to dictate standards of care, but instead were designed to give direction to a team physician and medical professionals.

6. What can I do if I disagree with a club coach’s decision on returning my injured child to play?

If parents disagree with how a coach handles a player’s injury, they can appeal to their individual league’s board of directors. If they feel that their concerns have gone unresolved, then can progress through the national league hierarchy.

7. My daughter has had two concussions playing soccer. Is she at higher risk for getting another concussion?

Research shows that once an athlete sustains a concussion, they are at a greater risk for subsequent concussions. A study conducted by Dr. Kevin Guskiewicz, chairman of the Department of Exercise and Sport Science at the University of Chapel Hill in North Carolina, found that players who’d sustained three or more concussions were three times more likely to have subsequent concussions than a player with no concussions at all. Recovery was also shown to be slower with a history of multiple concussions.

8. My daughter hit her chin during a fall in gymnastics and now has had a headache. Does she have a concussion?

9. Every time my son “heads” the ball in soccer, I cringe. Is he at risk for a concussion if he keeps heading the ball?

Soccer balls are known to travel at speeds as high as 37-74 mph. But research continues on whether heading causes concussions. Recently Dr. Michael Lipton of Albert Einstein College of Medicine in New York conducted a study and found that players who had headed soccer balls more than 1,000 times in the previous year showed reductions in verbal memory and visual motor processing speed. To date, however, organizations such as US Youth Soccer have not made any rule changes because of Lipton’s research. Todd Roby, a representative from US Youth Soccer, said that the organization will continue to monitor and receive input from the medical field regarding this and other research

10. My daughter had a concussion and is still having trouble concentrating in school. Can a concussion impact a child’s ability to learn?

Many student athletes who’ve sustained concussions report having trouble concentrating in school. According to Dr. Todd Arnold of St. Vincent’s Sports Performance in Indiana, a concussion can have a tremendous effect on a student’s cognitive ability, depending on what part of the brain is affected by the impact. And since a concussion impacts a student’s processing ability as well as their reasoning and memory functions, schoolwork is bound to be affected. 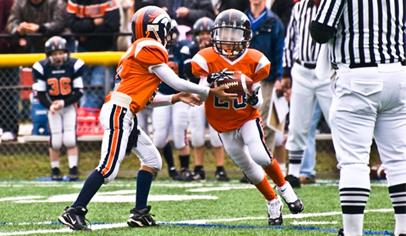 Concussions in Youth Sports: When in Doubt, Sit It Out 10 Easy Ways Families Can Exercise Together